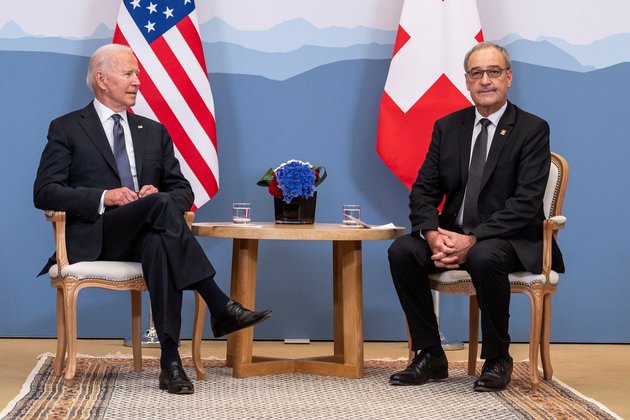 U.S. President Joe Biden and Russian President Vladimir Putin are set to meet Wednesday in Geneva with both sides expressing low expectations for any major agreements.

U.S. and Russian officials said there would likely be four to five hours of talks. The agreed-upon format includes an initial session with the two leaders along with U.S. Secretary of State Antony Blinken and Russian Foreign Minister Sergei Lavrov, and then further discussions with an expanded group.

A senior Biden administration official told reporters en route to Geneva that one potential outcome Wednesday is reversing the recall of each country's ambassador.

U.S. Ambassador John Sullivan and Russian Ambassador Anatoly Antonov returned home earlier this year amid worsening U.S.-Russia relations. Both ambassadors were due to be in Geneva on Wednesday.

A senior U.S. administration official said Biden's goals in the talks included seeking areas where the United States and Russia can work together, to clearly state U.S. vital national interests and that "Russian activities that run counter to those interests will be met with a response," and to lay out his "vision for American values and our national priorities."

The meeting takes place in the final hours of Biden's first trip abroad as president. During the past week, he has attended the G-7 summit and held talks with NATO and European Union leaders, seeking to boost relations with allies and consult with them about the U.S.-Russia talks.

When a reporter asked Biden shortly after his arrival Tuesday in Geneva if he was ready for his meeting with Putin, the U.S. leader said, "I'm always ready."

The United States flag waves on a bridge near the fountain Jet d'eau in the Lake Geneva in Geneva, Switzerland, June 15, 2021.

In an interview with NBC News, Putin said U.S.-Russia ties had deteriorated to their "lowest point in recent years."

Following their meeting, Biden and Putin are expected to appear separately before reporters, unlike in 2018 when Putin and former U.S. President Donald Trump held a joint news conference after their summit in Helsinki.

At that time, Trump contradicted his own intelligence agencies by saying he had no reason to doubt Putin's assertion that Russia did not meddle in the 2016 U.S. presidential election.

"A solo press conference is the appropriate format to clearly communicate with the free press the topics that were raised in the meeting - both in terms of areas where we may agree and in areas where we have significant concerns," a White House official said Saturday.

A senior U.S. official told reporters Tuesday that cybersecurity, in particular ransomware attacks, "will be a significant topic of conversation" between Biden and Putin.

In May, two key U.S. businesses - Colonial Pipeline, which transports fuel in the southeastern United States, and the JBS meat production company - were targeted in cyberattacks believed to have originated in Russia. Both Colonial and JBS paid millions of dollars in ransom demands to restore their business operations, although U.S. law enforcement officials have recovered some of the money Colonial paid.

Putin has rejected U.S. claims that Moscow and Russian hackers are carrying out debilitating cyberattacks on American companies and government agencies.

The two leaders are also expected to cover strategic nuclear stability and souring relations between Russia and the West.