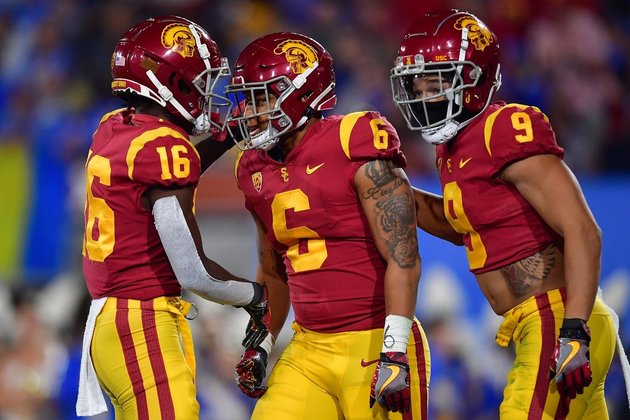 USC (10-1, 8-1 Pac-12 Conference) gave up three consecutive UCLA touchdowns over the late third quarter and into the fourth. Laiatu Latu delivered a critical third-down sack, forcing the Trojans' first punt of the game and giving the Bruins possession again.

On the next play, Foreman stepped in front of Thompson-Robinson's pass attempt up the middle for USC's third interception of the UCLA quarterback, to get the critical stop.

With the win, USC sewed up a berth in the Dec. 2 Pac-12 Championship Game. The Trojans close the regular season hosting nonconference rival Notre Dame.

Thompson-Robinson completed 23-of-38 pass attempts for 309 yards with four touchdown passes -- three to tight end Michael Ezeike -- and rushed for another 81 yards with two touchdowns.

USC quarterback Caleb Williams outdueled him, setting a career-high with 470 yards on 32-of-43 passing. Jordan Addison caught 11 passes for 178 yards with a touchdown, and Kyle Ford hauled in Williams' other touchdown pass.

Williams added another 33 yards with a touchdown on the ground, while Austin Jones -- starting in place of the injured Travis Dye - ran for 120 yards on 21 carries with two touchdowns.

UCLA (8-3, 5-3) jumped ahead 14-0, capitalizing on a pair of early USC misfires deep in Bruins territory. The Trojans had three trips into the UCLA red zone that failed to net any points.

The Bruins, meanwhile, went 4-of-4 on red-zone attempts. UCLA's inability to slow the USC offense, which gained 649 total yards, made the difference. The Bruins gained 507 yards.