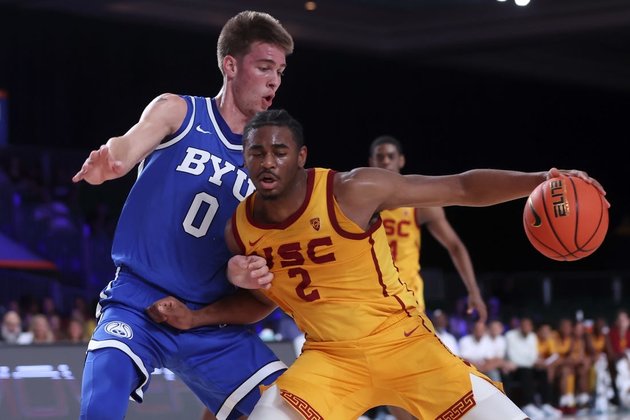 The Trojans (4-1) held BYU to just 25-of-59 shooting from the floor and used a stretch of more than four minutes midway through the second half in which the Cougars went without making a field goal to open a 13-point lead.

Ellis and Reese Dixon-Waters, who finished with 13 points, combined for the first 15 Trojans points during that ultimately decisive run.

Joshua Morgan capped the dominant stretch with three of his points. The USC big man also grabbed 10 rebounds, blocked a shot and made a steal. Tre White ripped off a pair or steals and blocked a shot to contribute to the Trojans' overwhelming defensive effort.

Four BYU scorers reached double figures, led by Spencer Johnson's 18 points. Jaxson Robinson added 14 points on 4-of-8 shooting from 3-point range, while Rudi Williams -- who finished with 15 points -- and Gideon George, who scored 14, each joined Johnson knocking down a pair of attempts from long range.

Their 3-point shooting efforts powered BYU to a 12-of-32 performance from deep. The long ball gave the Cougars some life down the stretch, as BYU battled back to within a single-digit deficit, but it ultimately proved too much to overcome.

So, too, did USC's strength on the interior.

Although the Trojans shot just 2 of 10 from 3-point range, their 34-20 advantage in points in the paint compensated. USC shot 53.4 percent from the floor overall thanks to its 29-of-48 performance on 2-point field-goal attempts.